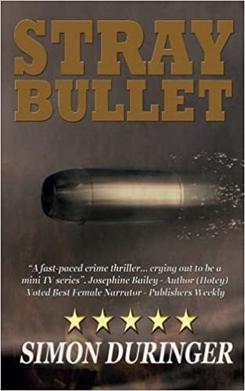 "A fascinating insight into the minds of some bestselling authors."

STRAY BULLET
A police detective wakes up in a hospital bed with a bullet wound to the chest and an impaired memory. Told he’s a hero, somehow he doesn’t feel heroic despite saving the Vatican envoy’s life… When his parents are killed in a car accident, Jack Shaw’s devastation leads him down a path of self-destruction; until an unconventional friend comes knocking and lures him into a world where he can learn to live again whilst exorcising his inner demons… As Jack and Harvey’s paths cross, a dark secret is revealed, a secret which will endanger their lives…

Simon Duringer was raised by his parents Kenneth and Penelope with his brother Carl in Berkshire & Oxfordshire in the United Kingdom. He has lived and worked across all parts of the UK. Simon has two children Jonathan and Christopher and he resides in Lancashire where he is an active member of The Chorley District Writers Circle and The Lancashire Authors Association. He has written articles for UK Armed Services magazines and International product review companies. Previously a website owner and forum administrator; Simon operated a number-crunching website before condensing the results of his 5 years of analysis into his first Amazon Bestselling book “How do I win on a lottery?” The book reached Number #1 in the genres of Game theory and Lotteries in the UK, USA, and Canada. Simon has turned his hand back to a passion that began in 2001; the art of writing suspense thrillers. In 2013 he completed his first in a series; “Stray Bullet” based on the fictitious characters of Harvey Walters and Jack Shaw. The book reached a ranking in the Top #25 of the Organised Crime Genre and was voted a Goodreads Top #10 ‘Stocking Stuffer’ in December 2013. Currently, he uses his spare time to work on the sequel to “Stray Bullet” aptly named “Phoenix” after the leading character within his latest book. An award-winning blogger Simon was a finalist in the UK National Blogging Awards 2014. He has interviewed over 60 Bestselling Authors; from the world's leading publishers Transworld, Random House, Double Day, Harper Collins, Harlequins, and Penguin to first time out and leading Indie authors. His most recent books; The Word Volume 1 and Volume 2, are compilations of the best of Simon’s 10 Q Interviews. Simon gains his inspiration through life experience; having worked within the UK Royal Air Force and latterly working within and managing civilian operational control rooms which he continues to do to this day. Interests: Most sports, number crunching, graphic design, I.T., writing, new challenges, puzzles.

transatlantic thriller whose resolution will confound your expectations."

"In Stray Bullet, Simon Duringer has given us a tense,

Have you ever fantasized about working alongside screen legends as their equal? What would it take to work for the same publisher as Dan Brown, or better still, to be nominated for and awarded an Oscar, Pulitzer, Emmy or Best Novel Award? How would an entertainer survive on a desert island with nobody to entertain...what keepsakes would companion them? What thoughts would cross your mind moments before death? Who inspires the inspirational; who do they hold high on a pedestal? Why do writers choose traditional publishing or independent publishing and vice versa? The answers to these questions and so much more are contained within. With contributions from award-winning novelists, directors, publishers, and artists including; Josephine Bailey, Martin Fletcher, Russell Blake, Giles Kristian, Doran Ingrham, Leigh Russell, Claude Bouchard, Phil Hogan, Tim Stevens, Rene Schultz, John Putnam, Matt Lynn, Paul Demeyer, Debra Salonen, Jake Needham, Robert Joseph Ahola, Garrard Hayes, Laura Taylor, James Becker, M J Summers, Ken Farmer & Buck Stienke, H Alan Day, Jack Hayes, Andrew Hughes, Michael Sherer, Alex Cord, Conn Iggulden, Jon King, Epilogue an interview with Author Simon Duringer by Matt Posner. The Word is brought to amazon by the UK National Blogging Finalist 2014 Simon Duringer. 10% of all royalties are donated to The Royal British Legion. Pre-release Reviews:

"Provocative questions as entertaining as the responses are revealing..." 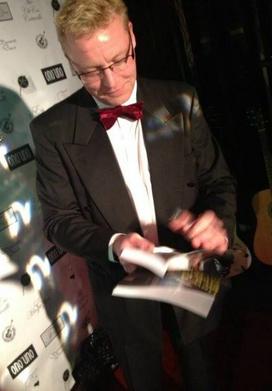 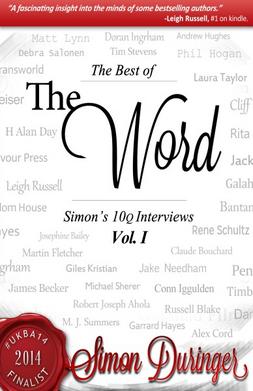